On Saturday 26 September, Old Queenswoodian Rachel Wakefield was ordained as an Anglican Deacon by the Bishop of Saint Albans at Saint Albans Cathedral.

The ordination ceremony, usually carried out in front of a large congregation, was streamed live by the Diocese of Saint Albans on YouTube, enabling the family and supporters of the diaconal candidates to safely commemorate the occasion. 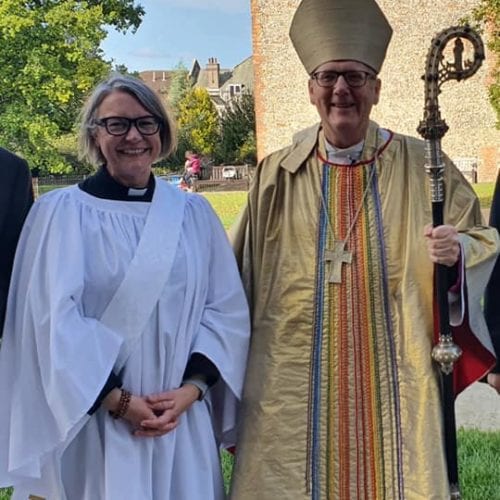 Rachel kindly shares the story of her journey towards ordination.

"I sensed a calling about 18 years ago, and began training to be a Methodist local preacher. At the time, I attended my Dad's church in St Albans (some of you may remember him from confirmations - Rev Caldwell) and I was working for BBC Radio in News and Sport.

After getting married, I began attending the Anglican church in Harpenden, at which point my training switched to becoming an Anglican lay reader.  I had then decided that in no way was I called to be an actual full time vicar. No, not me!

I was licensed in 2014 (after a long training period due to health issues with my son and, well...life) after which people kept asking me if I had considered full time stipendiary ministry.

There were a few odd moments when I began to wonder if they were right, so having got so fed up with people suggesting this, I agreed to start the discernment process (the long journey of conversations, essays and three days of interviews) to prove them all wrong.

It seems they were right! I started training part time in 2018 while continuing to work as a Communications Consultant. The training included weekly lectures in London and seven residential trips a year, combined with all the placements and essay writing required to prepare me for ordination. It was really hard juggling work, family and study but I got there, and my final essays were approved a few weeks ago. Huge relief!

My ordination to the diaconate was postponed due to lockdown but I was licensed as a lay worker by the Bishop of Hertford at the end of June, and was finally ordained by the Bishop of St Albans at the end of September. I have returned to an 01707 phone number as I am serving my curacy at St Francis of Assisi Church in Welwyn Garden City (at the back of John Lewis). Driving past Stanborough Lakes, I often ponder if I could rediscover the windsurfing skills I learnt there while at Queenswood!"

If all goes to plan I hope to be made a priest next June. I'm not sure that Queenswood with its Methodist affiliation, has too many Anglican priests amongst the alumni, but if you are one, do let me know!"